April 20, 2022 | | As the music began, about 15 people seated around large round tables took up watercolor pencils and let the symphonic sounds guide their hands as they applied colorful streaks and patterns on a plain white board.

Some made bold, jagged marks while others sculpted soft curves. Some used dark colors; others, pastels or brilliants. They changed colors, styles, mediums and tools as the songs changed to create different moods. 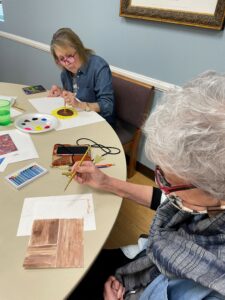 Kay Waldo, left, and Bobbie Verser work on their artwork.

Before trying their hand at abstract art, Arts Integration Services instructor Elly Bates showed them a famous abstract painting that Wassily Kandinsky created in 1925 titled “Yellow, Red, Blue.” They learned that the Russian painter often listened to the music of composer Arnold Schoenberg – which they soon began listening to – for inspiration when creating his masterpieces.

Hosted by the University of Arkansas Movement Disorders Clinic for Medical Sciences (UAMS) in conjunction with Arts Integration Services, the March 29 class at St. Michael’s Episcopal Church in Little Rock was the first of five workshops scheduled on Art for Parkinson’s through July, with more to come. Classes are designed to introduce Parkinson’s patients to the art, which research shows can help them improve their motor skills, and which Parkinson’s patients say is relaxing and helps control their tremors .

The second session of this monthly course took place on April 19 at St. Michael’s. A third session is scheduled for May 17 at the South Arkansas Arts Center in El Dorado, and the final two sessions of the first semester, June 21 and July 19, will again be held at St. Michael’s. Each session runs from 9:30 a.m. to noon and is free. Patients are encouraged to attend as many sessions as they wish, and accompanying caregivers are encouraged to participate. A virtual stream is available for those unable to participate in person.

Bates, a painter, showed the class five examples of well-known paintings that their creators said were inspired by music. 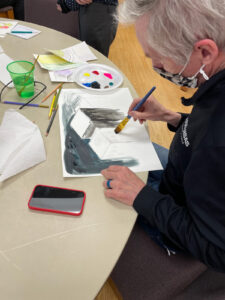 Then, as she played different selections of music that artists were known to inspire their art, she encouraged attendees to try out a variety of tools and colors to create whatever came to mind. In front of them were watercolor pencils, which could be used dry or dipped in water, oil pastels and acrylic paint.

From the start, she assured the group: “There is no pressure. I’m not asking for any realism or anything like that.

“I’m confident you can do it,” added Suzanne Dhall, Dr.PH., MSPH, CHES, health educator in the UAMS Department of Neurology. “Let’s have fun!”

Dhall, who organized the workshops, said she eventually hopes to offer classes that incorporate “an intergenerational component, where children and patients with Parkinson’s disease work together. I think we have a lot to learn from each other. »

Bates told the class that Marc Chagall, one of the first modernist painters, was known to listen to “The Magic Flute,” an opera by Wolfgang Amadeus Mozart, on repeat in his studio while creating many of his famous pieces.

John Helmcamp of Little Rock, a Parkinson’s disease patient who for 10 or 12 years has been making and selling pressed flowers using frames found at estate sales, said he likes to try a form of art – drawing and painting – in the studio. He started a piece with watercolor pencils while listening to “The Magic Flute”. He added layers as the musical selections changed and dubbed the finished product “the Phoenix”.

The 29-year-old former registered nurse, who was also a ballroom dancing instructor, said he didn’t let Parkinson’s disease stop him from creating his pressed flower artwork, but “some days my left hand just says no, not today”. He is right-handed and uses his right hand to arrange the flowers, while his left hand serves as a stabilizer even though it is prone to shaking.

“Sometimes focus helps me get away from the tremors,” Helmcamp said.

Kay Waldo, another participant who has had Parkinson’s disease since 2012 and retired in 2020 as director of administrative services at the Arkansas Medical Society, attended the workshop with her caregiver.

“I’m just looking for things that I can do and have fun,” she said. His finished painting featured a large yellow sunflower surrounded by bright green vines.

Frank O’Mara, a former athlete who ran track for the University of Arkansas at Fayetteville and was diagnosed with Parkinson’s in 2009, said he attended the workshop at the suggestion of Rohit Dhall , MD, Professor of Neurology and Director of Neurodegenerative Disorders at UMS. O’Mara, who was trained in civil engineering, impressed his classmates with a painting made up of rectangles that came to represent a cityscape.

“Are you an architect? someone asked.

Bobbie Verser, a Parkinson’s disease patient since 2016 who taught for 20 years and then spent 12 years working as an administrator for a state circuit judge, said she saw information about the workshop in a UAMS waiting room and that it was a way to meet people.

“It’s good for meeting people and it works on your motor skills,” she said. “I do writing exercises at home.”

Pour used various shades of brown to create a set of rectangles that looked like a section of wood flooring. 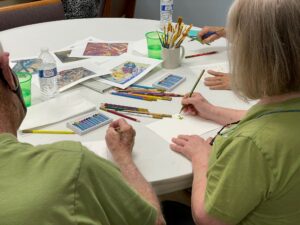 “Things like that we love,” said Nancy Hurlburt, who was involved as a carer for her 48-year-old husband who was diagnosed with Parkinson’s in 2011. “We’re happy, happy, happy to try this. “

Preston Hurlburt proudly displayed his painting, which consisted mostly of shades of dark green. He said he evolved into a birdbath after starting out as an alligator in a tree.

“It’s fun,” said Hurlburt, who once worked in industrial construction.

By late morning, the finished products also included abstract intersections of straight and blurry lines in a dizzying array of colors and a serene landscape under a rising or setting sun. 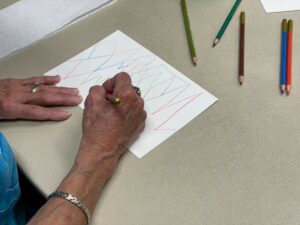 A participant experiments with abstract art.

Participants were invited to leave their finished work to be included in the art exhibition of the works of the five workshops of the first semester.

For more information or to register for an upcoming class, visit bit.ly/PDArt1 or contact Suzanne Dhall by email at sjdhall@uams.edu or by calling or texting her at 602-635 -0739.